Your 25-second video preview has ended.

Who Needs a Speculum?

In a time when sutureless cataract surgery is the norm, Inder Paul Singh, MD, shows how “old school” 6-0 episcleral stay sutures can save time, reduce or eliminate need for a second hand instrument or speculum, and lessen the stressors associated with eye movement. Here he presents several cases where this approach proved valuable.

In a time when sutureless cataract surgery is the norm, Inder Paul Singh, MD, shows how “old school” 6-0 episcleral stay sutures can save time, reduce or eliminate need for a second hand instrument or speculum, and lessen the stressors associated with eye movement. Here he presents several cases where this approach proved valuable.

Hey, everybody. This is Dr. Paul Singh. I got a question for you. Do we need a speculum during cataract surgery? This video is going to describe a technique my father, Dr. Kawar Singh taught me many years ago, a technique that's really saved me a lot of time and stress over the years. It involves 6-0 episcleral stay sutures. That sounds kind of old school, I know. Because, we always talk about sutureless cataract surgery. But, something as simple as a 6-0 silk suture during surgery can not only save you time, complications, but also help with the stress level that we all deal with during surgery.

So, again, what are the advantages of a stay suture? Well, the eye doesn't move during surgery. I've seen countless videos of people struggling to keep the eye still and having to yell at patients to keep their eye looking at the light. It also provides counter traction. Unlike a retrobulbar injection, you have counter tractions, so that way you don't need a second instrument to stabilize the eye, when you're putting your lens in the eye or trying to do a capsulotomy, etc. it also allows you to focus attention on the surgery and not the movement of the eye. And, I think that does help with not only efficiency but also side effects and complications. You can implant a lens through a small incision, as we'll talk about. And also, I think, for those hyperopic eyes, smaller eyes, those tighter orbits, I think it does help prevent from posterior pressure, which also then for prevents vitreous prolapse, which can be an issue. And, I think the most important issues, for me, is the decrease in stress. It has really decreased my stress level tremendously.

So, here's an example, of a case where I did a speculumless surgery. I'm taking a 6-0 silk suture here. This is through the superior episclera. It's not a bridle suture. I'm not going under the muscle. Anywhere through the episclera. Now, down below as well. As soon as I engage episclera, I turn my needle, that way I'm not going too deep. Now, I just basically take a mosquito or some kind of clamp, clamp it to the drape superiorly and inferiorly. Now, I'm telling the patient right now, "Move your eye." Nothing's happening. The eye's staying still. It's beautiful.

So now, you make your incision here. I'm doing a triplanar incision, a Langerman incision there. I'm not using a second instrument to stabilize the eye. The eye's right at primary gaze. And, I can control where the eye moves, doing my capsulotomy with my cystotome needle. The eye's not moving.

Here I am doing just a straightforward kind of a stop and chop type of procedure, doing my groove here. And again, the beautiful thing is, no matter how dense the cataract is, the eye doesn't move. I'm taking out my nucleus. I am using a second instrument here, but not to stabilize the eye, just more to help with cracking.

And, I think also during I/A, how many times with the eye moving all around? Yes, the eye's moving a little bit here, but so little movement compared to what we see commonly when we're trying to remove the cortex and epinuclear shell that we see.

Now, putting a lens in the eye, yes, the eye moves a little bit there, but the counter traction allows me not to have to use a second instrument. Now, this is a case was interesting, because there's a new tech who loaded the lens kind of incorrectly. And, unfortunately, as you see here, with this three-piece, uh, silicone aspheric lens, the haptic got bent. And, when these silicone lenses with PVA haptics get bent, it's hard for them to go back to a memory position. And so, I'm trying to still salvage this lens.

And, and after a few minutes, here, I realize it's probably not going to happen. I'm trying to push it there. I'm like, "Please open up. Please open up. I know you will. Maybe if I just keep pushing it there." Now, I'm like, "Well, it looks kind of okay, but, nah, I'm not going to leave it." So, I go ahead and just take my lens cutter, and cut the lens, and take it out. But, again, the advantage of having those episcleral stay sutures, the eye's not moving. I'm not trying to fight with the eye, as I'm doing this case here, trying to cut a lens out of the eye and try to place a new lens. That's one less variable, one less stress, that I have to deal with during cataract surgery.

So now, I'm going to go ahead and place the lens back in again, a new lens. And again, this is how it should go in beautifully. I love these aspheric lenses. They do a great job here, whether it's in the sulcus or in the bag. Now, let's go ahead and cut the sutures out, and that's it.

Here's another example of a case where I did actually recently. You see superiorly that pannus with that corneal scar there. Patient actually had a history of trauma. Partial transplant had significant thinning there, kinda scleromalacia up there, so I didn't want to put a paracenthesis or any kind of incision up there. I made my paracenthesis inferiorly. So, I said, "Let me go ahead and use a miLOOP, because I can't use my left hand now as a second instrument to stabilize the eye or to the break the nu-nucleus. Use a miLOOP, broke the nucleus in half, and now I'm using here a vacuum-based system here to help remove and disassemble the nucleus.

But, what's nice, again, about those stay sutures, I'm not fighting the eye to move around, by moving around, and I can actually keep my phaco tip at the middle of the eye, and just let the nuclear pieces come to me. So, this is the advantage, I think also, of a vacuum-based system as well. But, the bottom line is the stress level that has gone down. Whenever you have complicated case or a standard case, not having to fight the variability of the eye moving is important.

Again, here I am with my irrigation aspiration not worrying about the eye moving at all. Now, this patient does have a speculum. I, I'll use a speculum sometimes, depending on the situation.

And now, here we are implanting a hydrophobic IOL through a sub-2-mm incision. And, I'm not using any second instrument or any would assist. And, the reason this is possible is because of those 6-0 silk sutures providing counter pressure. I usually do most of my cases using a sub-2 incision, using what we call a mixed needled. So therefore, I don't have to open up the wound at the end too implant the IOL. Again, this is all because of those stay sutures.

And, here's another patient where I'm doing a femto-assisted cataract surgery. I'm doing a viscodilation, a viscoelastic removal near the anterior capsule. And again, now I'm using, again, one hand here. I'm not using a second instrument to stabilize the eye or to break it up in here, because I have my femto that's broken up my nuclear pieces, or fragmented it. So therefore, I can go ahead and stay in the middle of the eye here with my vacuum-based system. And again, the beautiful thing about this is I really only need one incision, my main incision. The paracenthesis is there in case I need to fill up the eye later on. But really, I'm only using the main incision.

So again, for me, the advantages can be from a safety perspective, from a stress level perspective. And, for those patients who, let's say, have hyperopic eyes, shallow chambers, where you're, you're, worried about posterior pressure, you don't have to use a speculum. Those stay sutures can keep the eye open and keep the eye still as well.

I think old school is actually cool again. So, to me using a 6-0 episcleral stay suture can allow you, sometimes, to not use a speculum, as you saw in that first case. Or, if you want to use a speculum, at least keeps the eye still, allows you to focus on what's important, which is removing a lens and putting a new lens in the eye in the safest way possible.

More Videos in this Series

Who Needs a Speculum?

Placement of a Hydrus Microstent

Snaring a Dislocated IOL with 5-0 Prole… 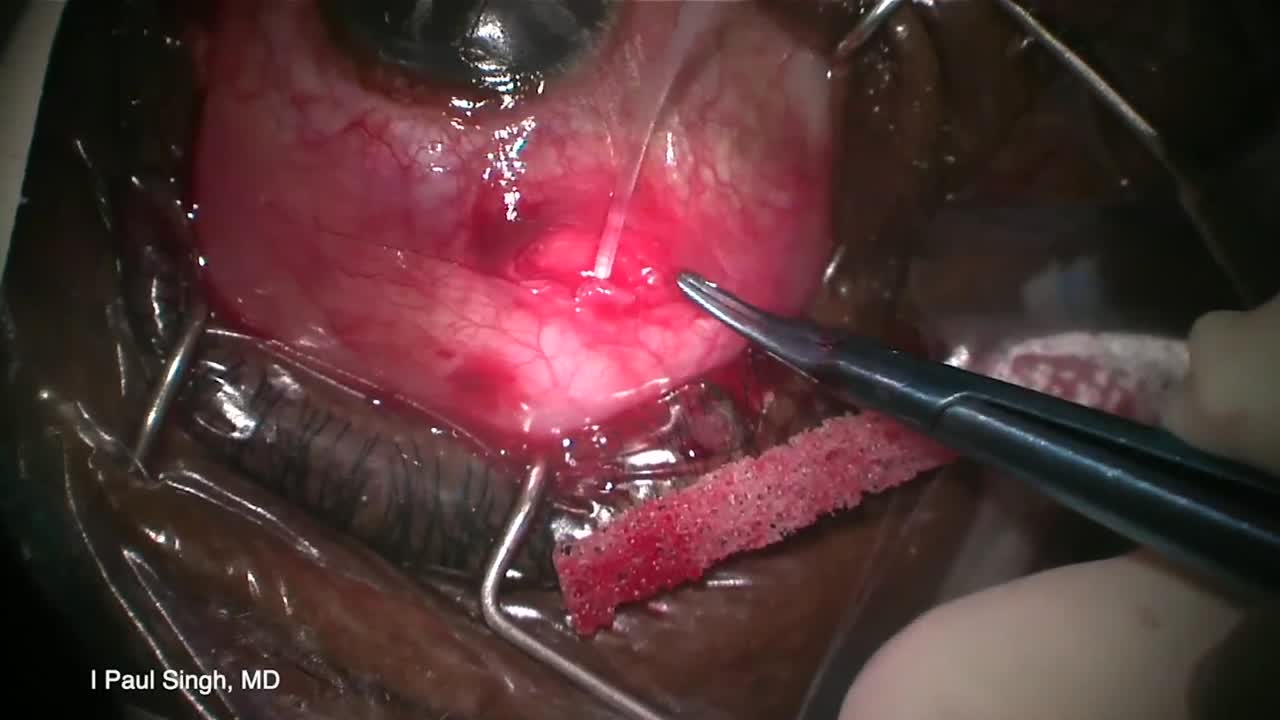 Placement of a Hydrus Microstent

We use cookies to offer a better user experience and to analyze site traffic. To comply with the European General Data Protection Regulation (GDPR), we are implementing a cookie consent manager to provide residents of the EU/EEA with the ability to customize their cookies. Until this is available, your continued use of this site will be deemed as consent to use of cookies.